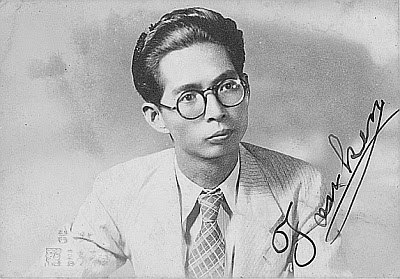 The great Taiwanese composer Deng Yu-Shian, the “Father of Contemporary Taiwanese Music”, wrote his famous folk melodies several decades ago, but much of his music is still very popular today.

Deng was born into a scholarly Hakka family in Longtan Township, Taoyuan County in 1906. When he was three years old, he moved to Taipei with his family because his father was appointed as a Chinese teacher at the Japanese School of the governor’s office. He had to get used to speaking the Holo language, under the circumstances.


At Taipei Normal School, where his father had taught, Deng became fascinated with music and composition. There was a piano in every classroom, as the students in this school were all trained to be teachers with music teaching abilities.

After his graduation in 1925, Deng began teaching at the Ze Hsin Primary School. As soon as got his pay, he would rush to buy books on music theory. In 1929, he decided to quit his teaching job and to pursue studies at the Tokyo School of Music for one year. He later worked as a translator for the Taichung District Court, but quitted the job after a few months.

From 1932 onward, he devoted his efforts to writing popular music, and for about 13 years, his songs were often big hits on the radio. In 1932, his composition “The Dadaocheng March”（大稻埕進行曲）gained good reviews and he was subsequently invited to serve as a professional composer and to train the singers for Columbia Music Entertainment, Incorporated. From 1933 to 1934, Deng composed songs that included “Longing for the Spring Breeze”, “Sorrow in a Moonlit Night”, “Golden Age of Dance” and “Flowers in a Rainy Night.”


His melodies reflected the life and the thoughts of the Taiwan people under Japanese colonial rule. He not only composed new melodies but also collected traditional folk songs in his spare time. However, he was unhappy when the Japanese colonial government asked him to restructure his melodies during the Second World War as motivational war songs. He therefore quitted his job and chose to be a teacher, as his wife was, in Cyonglin Township in Hsinchu County. In 1944, he fell ill and died at the age of 39.


Deng’s influence on Taiwanese music is everlasting. The first Deng Yu-Shian Memorial Concert was held by Taoyuan Philharmonic Orchestra in the Auditorium of Longtan Township Hall on February 15, 1992. The Deng Yu-Shian Composition Concert was first staged at the National Concert Hall on July 14 and 15 that same year.


On November 29, 2002, in a memorable concert in Taipei, Placido Domingo, a world-renowned operatic tenor, sang "Flowers in the Rainy Night” in Taiwanese with the well-known Taiwanese female singer Chiang Hui. This particular work has acquired the status of a musical centerpiece at international cultural events in Taiwan.