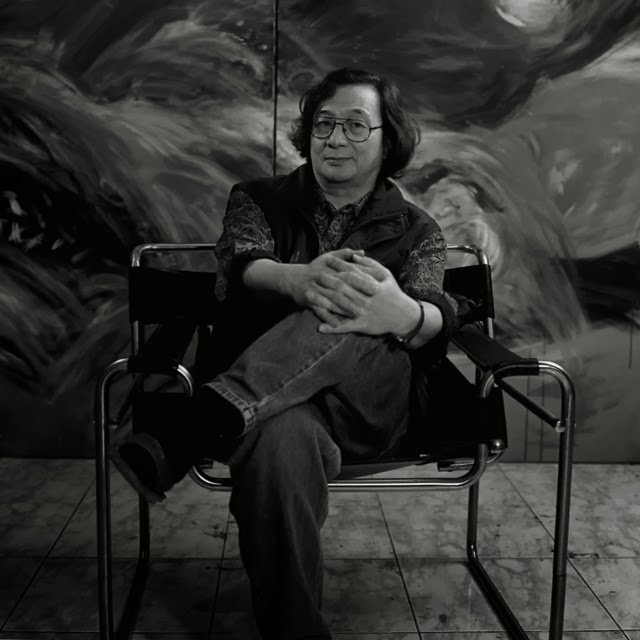 The lifting of Martial Law in 1987 brought a liberalized cultural-political environment that allowed artists to deal with issues of self-identity and self-fulfillment through their works. Art history studies not only help to enhance our understanding of these artworks, but also articulate the inner spirit of a culture. Shaih Lifa’s "Taiwan’s Art Movements under Japanese Occupation," which follows the structure of Wang Bair-juan's（王白淵） earlier studies, "Taiwan’s Art Movements (1955)," pulls together scattered and often unorganized pieces of historical evidence, and in doing so, provides us with a clear view of the development of Taiwan’s fine arts.

A note about Shaih Lifa

Born in 1938, Shaih Lifa was separated from his parents, as a child. This unsettling experience drove Shaih to seek solace in art; it also contributed significantly to his artistic sensitivity, and prepared him for a life-long artistic career.

Shaih Lifa lived in for two years, and in for twenty-two years. During those years abroad, he rose to fame by publishing voluminously on artistic trends in the West as well as on art movements in . His books include “Some Notes on Art: The Letters of Shaih Lifa”, “The Adventure of Art”, “The Art World of New York”, “Great Taiwanese Painters of the Twentieth Century”, “Reshaping the Mind of Taiwan”, “Exploring the Historical Horizons of Taiwanese Art”, and “New Taiwanese Art”.

Since returning to , he has continued his longstanding contribution to Taiwanese art by creating a series of installation projects and publishing more books.

In 1972, Shaih Lifa first contributed an article “On Hsu Pei-hung and his art” to the supplement section of the China Times. This article was well-received in art circles in .

His book, " ’s Art Movements under Japanese Occupation," was then serialized in Artist Magazine after the launch of the first issue in 1975. This book is now widely regarded as a significant milestone in ’s art history and the Nativist Movement of the 1970s.

In describing the basis on which he undertook this study, Shaih once said: “Fortunately, helped me to find my own historical perspective which is entirely based on the characteristics of Taiwanese fine arts. I would emphasize that it is imperative that one writes art history in the first person. In other words, when a Taiwanese author pens art history, it can be identified as ‘Taiwanese art history’ as long as it starts with ‘I’.  This is the most basic principle of all historical studies.”

Shaih Lifa has long had other interests apart from his art. With the help of friends in literary circles, he has written and published a number of books since returning to . These include “Those Painter Friends of Mine”, “Figures unearthed in ”, and “Notes on Our Predecessors”. Some of these books feature profiles of Shaih’s friends and colleagues in the art world, while some of them explain his observations and interpretation of historical characters, from a contemporary perspective.

Shaih explained his particular interest in historical novels thus: “Whenever I find history too unreal and difficult to engage mentally, I would seek comfort from novels because a good historical novel often makes the stories seem more real and believable than history, and significantly boosts my confidence in developing plots for my writing. When I rewrote " ’s Art Movements under Japanese Occupation," which was first published thirty years ago, I felt strongly that many of the paragraphs were in fact written by someone else; it is only when I read it out loud that the book becomes mine.” When Shaih asked his friends to suggest the most appropriate color that represents the novel, the most popular choice turned out to be violet. Shaih therefore chose Grande Chaumière Violette for both his ‘novel’ and for the retrospective exhibition.

“Taking a retrospective view of one’s past by means of exhibited documents is like opening a book for everyone to closely examine. ... I am not entirely sure whether or not there is anything worth noting in my life. Between what’s notable and what’s not, I realize that my life has had too many repetitions thus far. I encapsulate my life experience in the brief act of artistic creation; what you see here are my views on life.”  -- Shaih Lifa

Shaih first returned to in 1988, six months after the 40-year period of Martial Law had been lifted. At the time, the extent of environmental pollution on the island was appalling. After he went back to the , he tried, but failed, to articulate through his paintings how he felt about all this.

After two years of struggle and careful consideration, he finally decided to express his complex feelings through the use of "readymade" objects. This is how the idea of "Aesthetics of Litter" was conceived. This project, which was the main feature of an exhibition on the theme of "Garbage," uses bin bags as a symbol of the twentieth century. It sets out to explore the environmental issues that confront in our time. By placing litter in the art museum, "Aesthetics of Litter" raises questions with regard to the status of the litter: does it remain an art object, a status it gained through the art exhibition? Or does it return to its initial character, i.e. simply garbage. By raising these questions, the piece can also be seen as posing the classical questions of conceptual art, i.e. “What is art?” “What is garbage?” “What is an art museum?”

An egg was surprisingly hatched from the bin bags after the "Aesthetics of Litter" exhibition. This, in effect, allowed the story of garbage to evolve into what Shaih called "oviparous civilization." Shaih started this project by making a collage with reproduced images of classical European paintings and then scribbled on this collage with transparent paints, before finally putting all this in an egg-shaped container. This signifies a new life cultivated in the egg, which can be seen as a symbol of the rebirth of civilization.

Shaih never thought this series would later be acclaimed as representing the peak of his painting techniques. With the simple oval shape, the prototype of four eggs marked the successful conclusion of this project.

Shaih also collected a large number of paintings by other artists, after he settled in . As he recalled the story behind each painting, he was brought increasingly closer to these works, and came to a realization about the nature of the collection. The collection reflects his experience, disposition, fate, personality and thoughts and symbolizes a certain aspect of his life.

Therefore, he decided that the retrospective exhibition should encompass the artwork that he had so far collected, and that he would display them as a single piece of his own work. He felt that this would most appropriately summarize the artistic ideals that he had held for many years.

A note about Grande Chaumière Violette

Grande Chaumière Violette is the most complete exhibition of Shaih Lifa’s works to date. This exhibition showcases Shaih Lifa’s paintings, manuscripts, newspaper clippings and his own art collection. Part of the installation project, "A Landmark Made of Floating Lights," as well as its full-sized prints, will be displayed in the Art Corridor of National Taiwan Museum of Fine Arts. This exhibition is organized in conjunction with a conference on Shaih Lifa’s contribution to the writing of Taiwanese art history. Renowned scholars will present their research at the conference, which will explore Shaih Lifa’s thoughts and philosophy on life, as well as his views on the history of Taiwanese art.

The above information is edited by Felicity Fei-Hsien CHIU（邱斐顯）, former editor of center of web and wireless news service, the Central News Agency.